For the full episode, listen by selecting the Play button above or by selecting this link, or you can also listen to the podcast through Apple Podcasts, Google Play, Stitcher, and Overcast.

If you liked this episode, please consider giving us a review on iTunes! It helps other people find the show and lets us know how we’re doing!

(for the full episode, select play above or go here)

Aaron Titus: “I almost disbelieved my own numbers, even though I chose the most conservative ones. It’s just outrageous. I’m like, ‘Really? A 233x ROI?’ That’s insane.”

Ginette: “And you are listening to Data Crunch.”

Curtis: “A podcast about how data and prediction shape our world.”

“Today’s episode is brought to you by Lightpost Analytics. Data skills are in intense demand and are key for organizations to remain competitive; in fact, Forbes listed the industry’s leading data visualization software, Tableau, as the number three skill with the most explosive growth in demand, so investing in yourself to stay relevant in today’s hyper-competitive, data-rich, but insights-hungry world is extremely important. Lightpost Analytics is a trusted training partner to help you develop the Tableau skills you need to stay relevant. Check them out at lightpostanalytics.com and let them know that Data Crunch sent you.”

“Today, we look at what it takes to understand a larger story—when many disparate voices come together to tell you something much more powerful, and specifically how it can help people deal with the large scale devastation of natural disasters. Let’s jump into how one man did something about his pet peeve, and it produced $300,000,000.00 dollars in savings. And then we’ll pop over to New Zealand to explore how a disaster situation affected Christchurch and what people did about it.”

Aaron: “I was a disaster relief volunteer in New Jersey during hurricanes Irma (Ginette: Here Aaron actually means Irene) and Sandy, and my area got very hard hit by Irma, and I started off as a relief volunteer and ended up directing a lot of those relief efforts for my church, and while I was there, I remember standing in very long lines, and a thousand of us would gather together at a field command center and spend an hour and a half waiting to get checked in, which is lightning speed for 1,000 people, but it’s still an hour and a half.

“And while everybody was waiting, they’d pull out their phones and would start playing Angry Birds, and the technologist in me would just scream inside, “I could have you all checked in with your work orders in 30 seconds, not an hour and a half!”

“And I abhor inefficiency—to a fault—like it’s almost a little bit of a sickness. I really ought to be better, but I really abhor inefficiency, and I hate it when people waste my time, and I hate wasting people’s times, especially volunteers. As a volunteer manager, your most precious asset are your volunteers and the time that they give to you, and when you waste that, not only are you wasting an hour right now, and that’s an hour that you’re not helping somebody, but then that volunteer has a bad experience, and they don’t come back next week, and so you’re not just wasting an hour, you’re wasting weeks when you’ve wasted volunteers’ time.”

Curtis: “This is Aaron Titus, the executive director for Crisis Cleanup, a platform that connects volunteers with survivors who opt. in for help cleaning up their properties after a disaster. After this moment of frustration, Aaron decides he’s going to do something about this inefficiency, and he spends over a year designing a system while trying to get people on board. And while people love the idea, there is no tangible support for it, so he decides to do it by himself on his own dime.”

Aaron: “In July 2012, Southern New Jersey was hit by a derecho storm, straight line winds, and that’s when I rolled out the alpha version of Crisis Cleanup, and it was built out of shoestring and Bubblegum, but it worked well. The basic idea was there. Folks would call 2-1-1; 2-1-1 would enter them into the system. I would put it on the map. Relief organizations would claim those work orders. It’d change colors on the map. Then you go do it, and then we’d closed them out. And the system worked well.

“Several months later, in October 2012, hurricane Sandy arrived, and we dusted the system off. It’d begin to break in predictable ways, ‘cause it was made out of shoe string and Bubblegum, and so I got connected with some very talented developers: Jeremy Pack and Bruce Christensen. They were able to rebuild it and make it a little bit more robust for Hurricane Sandy. Also got in contact with Andy Gimma, another very talented developer, and we rolled it out, open-sourced it, roll it out for 120 organizations during Sandy, and it worked very well.

“So after Hurricane Sandy, many of these organizations would redeploy to new disasters, and I would get a call from a colleague in Moore, Oklahoma, “Hey, there’s been a tornado. Can we use Crisis Cleanup? And like I’m going to say ‘no,’ and so Andy Gimma and I would just not sleep for a week to get the system up and running and make incremental improvements to it, and that process has continued on to the point where I now get a call every two weeks from someone. One of my colleagues somewhere across the the country.”

Ginette: “So how does Crisis Cleanup work, exactly? One of the first things is Aaron, or another person in charge, sets up a 1-800 number for the public. Disaster victims call this number to opt in for help cleaning up their devastated properties. With the information they receive on these phone calls, the command center develops a dataset of information that they use to help disaster victims. They use it in part to display all of these work locations on a large map of the area to understand the big picture of who wants help. The work that needs to be done is displayed as a location in red on this map, and then trusted and vetted partner volunteer groups login and claim the work orders they want to fill. Once a disaster victim is sufficiently helped, the location’s color changes.”

Aaron: “The first step in helping anybody is to do an assessment. Well, if you do a door-to-door assessment, it takes between 15 and 45 minutes to do in a single assessment, and you always, always go in twos and often you have a team of five down the street waiting for something to do.

“And so at a minimum, an assessment takes between 30 and 90 volunteer minutes and can range into several volunteer hours as others are waiting for you to complete the assessment. However, when I have volunteers answer the phones, a single volunteer can perform an assessment on average in 7 and half minutes, and so that’s a fairly significant savings, and in fact, we’ve done some calculations, and for every hour and a half that a volunteer answers phone calls and answers work orders on the phone, they save enough time in the field for volunteers to gut an entire house, so it’s a huge force multiplier.”

Photo by Marcus Kauffman on Unsplash 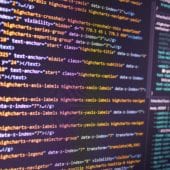 The Complex World of Data Scientists and Black-Box Algorithms

Top Four AI Podcast Episodes of August and September 2017, Plus One of Ours