A recent stats-themed XKCD comic made the rounds: 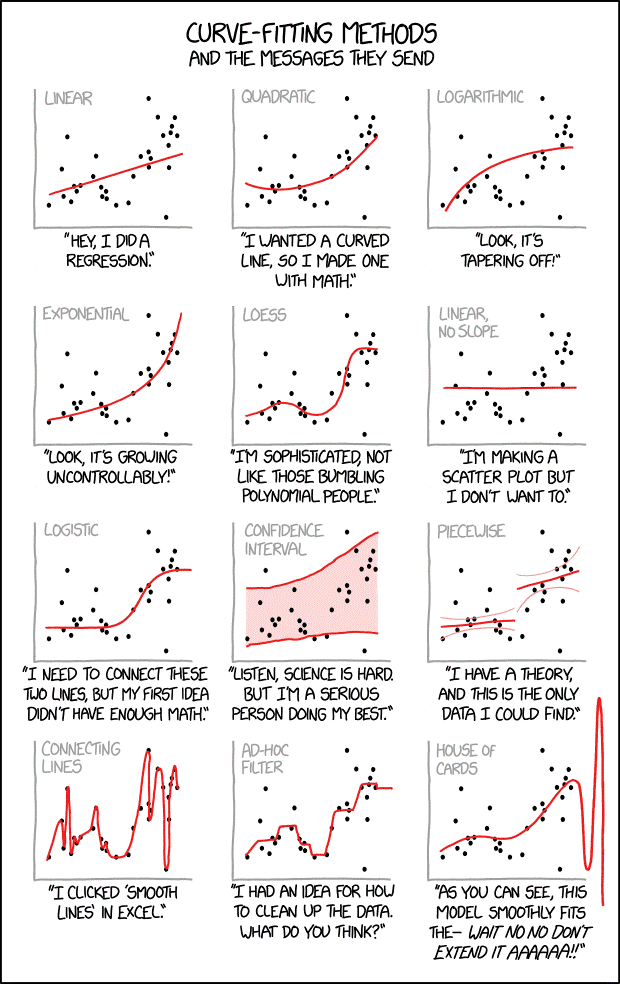 and Tableau Zen Master Mike Cisneros nailed it when he said:

If you don’t feel this way when you use the Analytics panel in Tableau, then I don’t believe you. https://t.co/NxlKtMY90V

What’s most hilarious about the comic is that the data points are exactly the same in each frame.

And yet, it’s true.  Statistics or predictive analytics in Tableau can seem daunting.  Some people feel they need an advanced degree to use statistics effectively.  And since they don’t, they just avoid them altogether.

Others feel that you can just drop in a line that looks cool and call it good.  Until, of course, someone starts to ask hard, probing questions of your analysis during a meeting in front of your boss and colleagues and you suddenly regret sleeping through that 8am stats class in college.

So, we’ve written this definitive guide to linear regression in Tableau.

The goal of this series of blog posts is to be a plain-English resource on linear regression models in Tableau, one of the most common forms of predictive analytics out there.

Linear Regression (aka the Trend Line feature in the Analytics pane in Tableau):

At a high level, a “linear regression model” is drawing a line through several data points that best minimizes the distance between each point and the line. The better fit of the line to the points, the better it can be used to predict future points on the line.  In other words, the less distance from the points to the line, the better, and the more accurate your projections.

Use Cases for Linear Regression Models

There are three key uses for linear regression models:

Determining the strength (or how much change they cause) of variables

See the following example where we compare Discounts vs. Profit Ratio using the Superstore data set that ships with Tableau. Here we compare the strength and direction of the relationship between the two variables.

We can even parameterize the variables to see how much impact any one variable or metric will have on another.

In other words, based on historical patterns over time what do we project will happen in the future?

See the following example looking at Sales by Month using the same Superstore data. We can reasonably expect Sales values to fall between the outside bands and close to the trend line in the middle in the next 12 months. 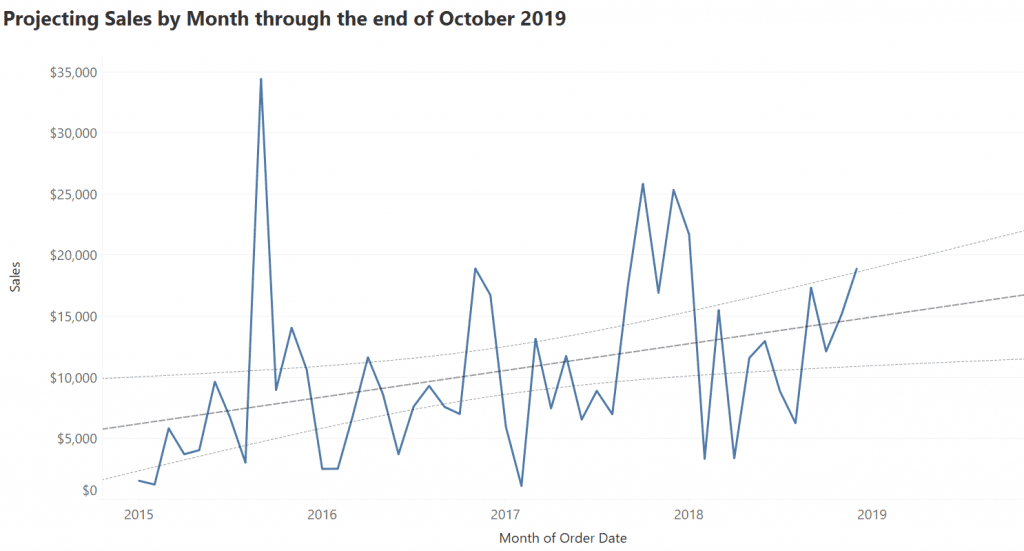 We can even adjust the type of regression being calculated to determine if that is a better fit to the data.  In the image below, we’ve adjusted the regression line from Linear to Polynomial of Degree 2, which gives us a slightly better fit than the linear.  But we want to avoid the issue that XKCD points out of just slapping on a line that looks cool.  We need to know if it’s more accurate or not.  In our next post, we’ll give you the tools to assess statistical significance and accuracy all using Tableau’s built-in predictive analytics tools. 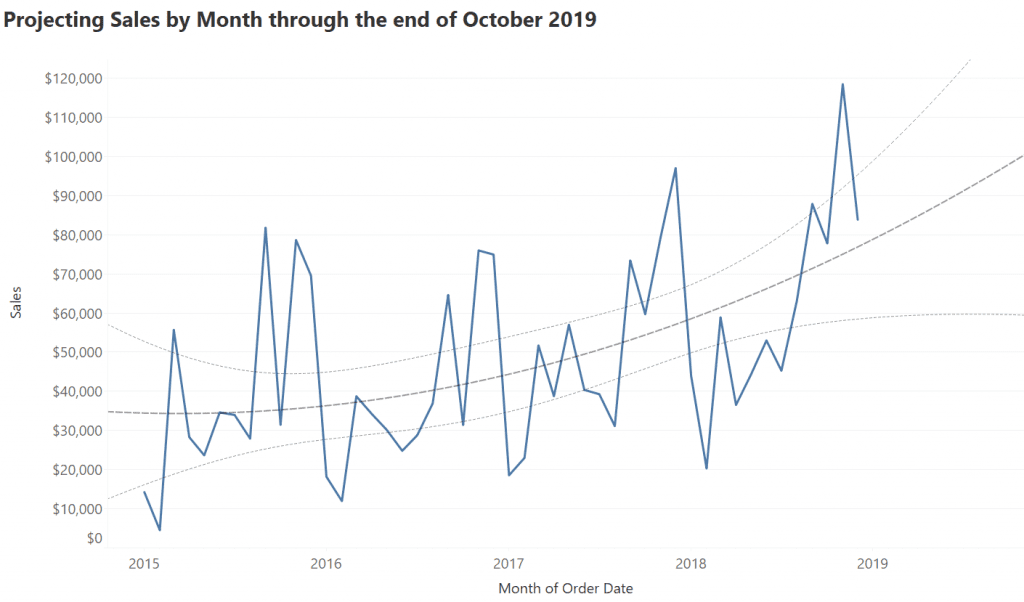 In other words, if we change Metric 1 by x amount, how much will Metric 2 change? This enables us to use existing data to estimate another value.  This is useful in what-if analysis.  For example, if we change prices, what will happen to sales?  Is this a significant impact or not? 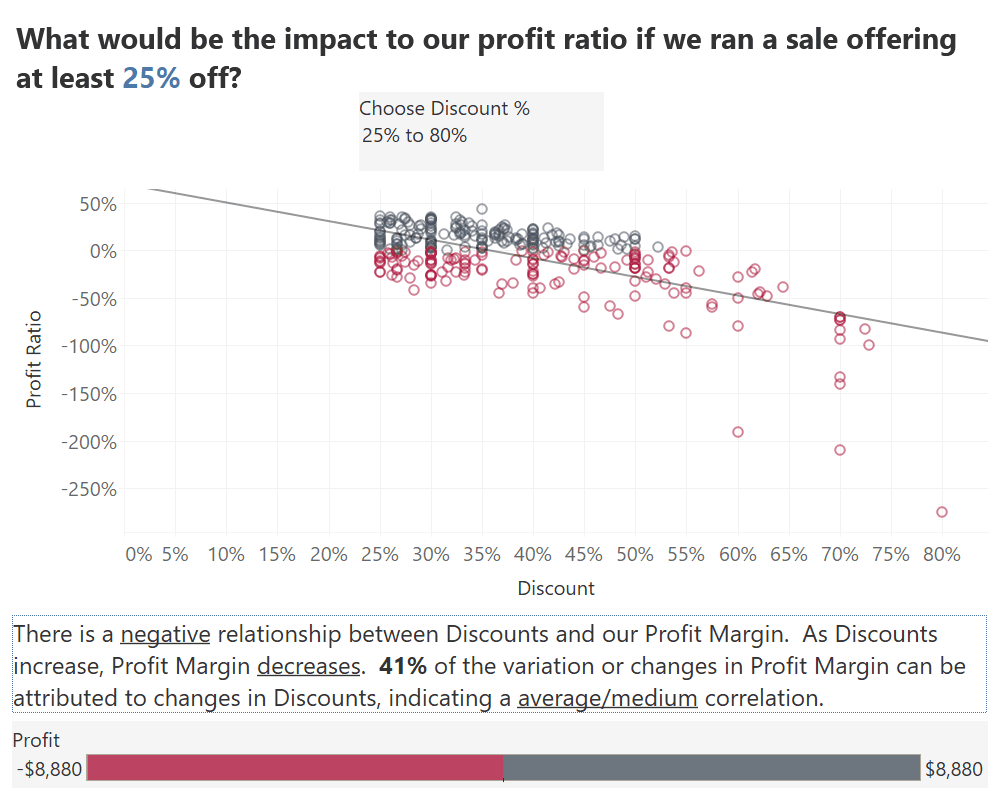 In the below image, we’ve used the same chart as above but changed it from linear to polynomial to again get a better estimate of the trend.  You’ll notice that we have lost our helpful calculations indicating the strength of the relationship and the direction of the relationship as calculating those becomes more of a challenge.  Fear not, however, we will tackle these in a subsequent blog post! 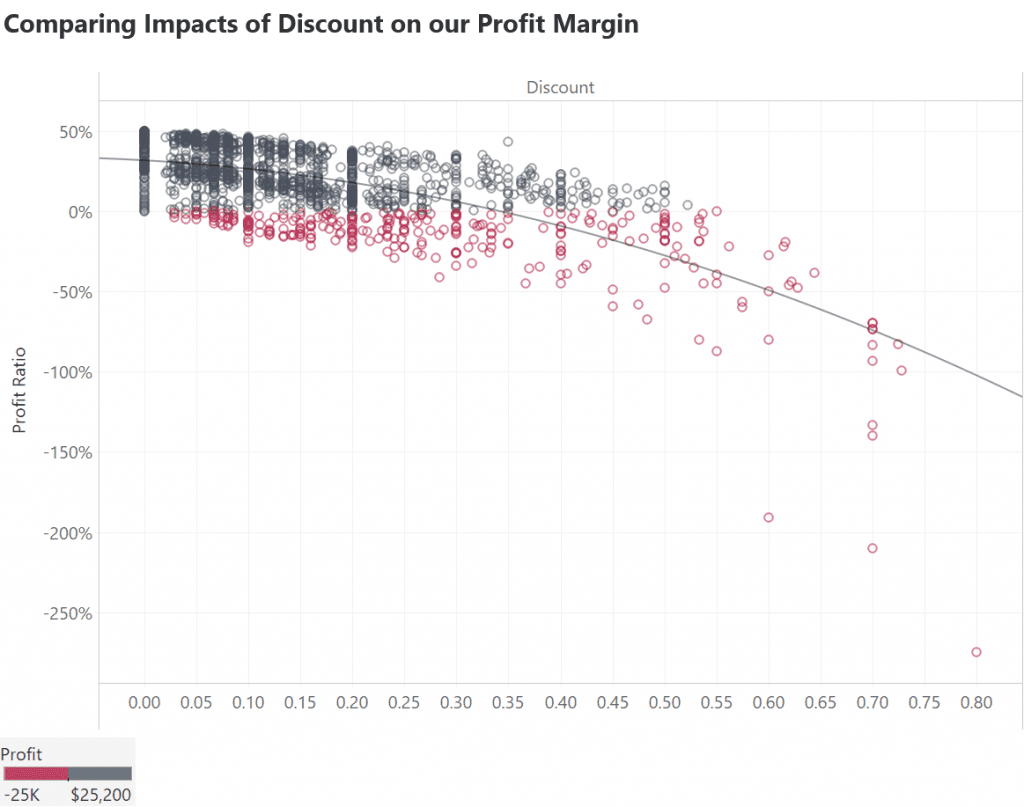 Altogether, we have several possibilities of predictive analytics within Tableau using regression analysis.  We can project forward in time, we can compare the impact of one metric on another, and we can make inferences about data we don’t currently have in order to run more accurate what-if type scenarios.

There are all sorts of applications to these possibilities.  Here are just a few:

There are many others.  If your field isn’t mentioned, drop us a note in the comments or send us an email and we can provide you some ideas and examples.  We’d love to hear from you. We also offer Tableau Training courses. Feel free to explore and download the charts from Tableau Public. Stay tuned for more blog posts in our linear regression in Tableau series!

Join the Data Crunch Newsletter for More on Tableau