What the Government Corruption World Map Teaches Us about Politics

Data and maps have a way of opening your eyes. The Government Corruption World Map is no different. Did you know that Costa Rica is the only country in Central America that’s on the positive side of this corruption scale? Or that the only countries with extremely high corruption in the Western Hemisphere are Haiti and Venezuela? And there’s an even deeper story to this data.

Below, we compiled data to easily show trends on our Government Corruption World Map.

Government Corruption World Map from Least to Most Corrupt Countries

We recently interviewed Justin Dillon, a man on a quest to fight against human trafficking and slavery. He has done a remarkable job combining art, design, and data science in this effort. His company, Made in a Free World, uses an impressive number of data sources to help companies source materials responsibly. Also, he has opened the data in a thought-provoking website that reveals to individual consumers how much slavery goes into goods they’ve bought.

It was an incredible story. I highly recommend you hear it in his own words. Also, see the episode titled “How Many Slaves Work for You” on iTunes, Google Play, Stitcher, Overcast, or any other podcast app).

I was curious to explore for myself some of the data he uses to deliver his insights. I was intrigued by one from Transparency International: The Corruption Perceptions Index. They have published this index every year since 1995. The index is perhaps the best worldwide measure we have on the level of corruption present in most countries, and it’s fascinating data. From their data, we were able to create informative Government Corruption World Maps for fast and easy understanding.

They changed their methodology in 2012. Therefore, we can’t strictly compare scores year to year prior to that year on our Government Corruption World Map. Even so, it’s interesting to see that things haven’t changed much worldwide over the past 18 years. I gathered their data from 1998–2016, from here.

Take a close look at the Governement Corruption World Map GIF right above this paragraph. It’s striking how constant the corruption distribution seems to be. I expected more movement, but the state of the world seems more or less constant. And last year, 75 percent of the world’s population lived underneath a score of 50. In broad terms, it means most people live in countries that were more corrupt than uncorrupt. But a more important question is, what does the Government Corruption World map really represent? What does it mean for the people living in each of these countries?

For people in the countries with low scores on the Government Corruption World Map, it means a lot of negative things. Public institutions that are supposed to be in place for the protection of citizens and society, like the police or the judiciary, are either dishonest or nonfunctioning. Extortion and bribery are present. People in power overlook and sidestep the rule of law.  They steal and embezzle money away from institutions and programs the public depend on, rendering these programs and institutions under resourced or completely ineffective. Also, they rip away large amounts of money from the people and the economy. They also restrict freedom of the press. It’s hard to overstate the amount of damage this does to a country and the people living within its borders. This is just the tip of the iceberg when it comes to the lessons the Government Corruption World Map can teach us about global politics.

But if we really want to understand the Government Corruption World Map, we need to dig deeper—really see what’s happening on a person-by-person basis—so we can understand and empathize. 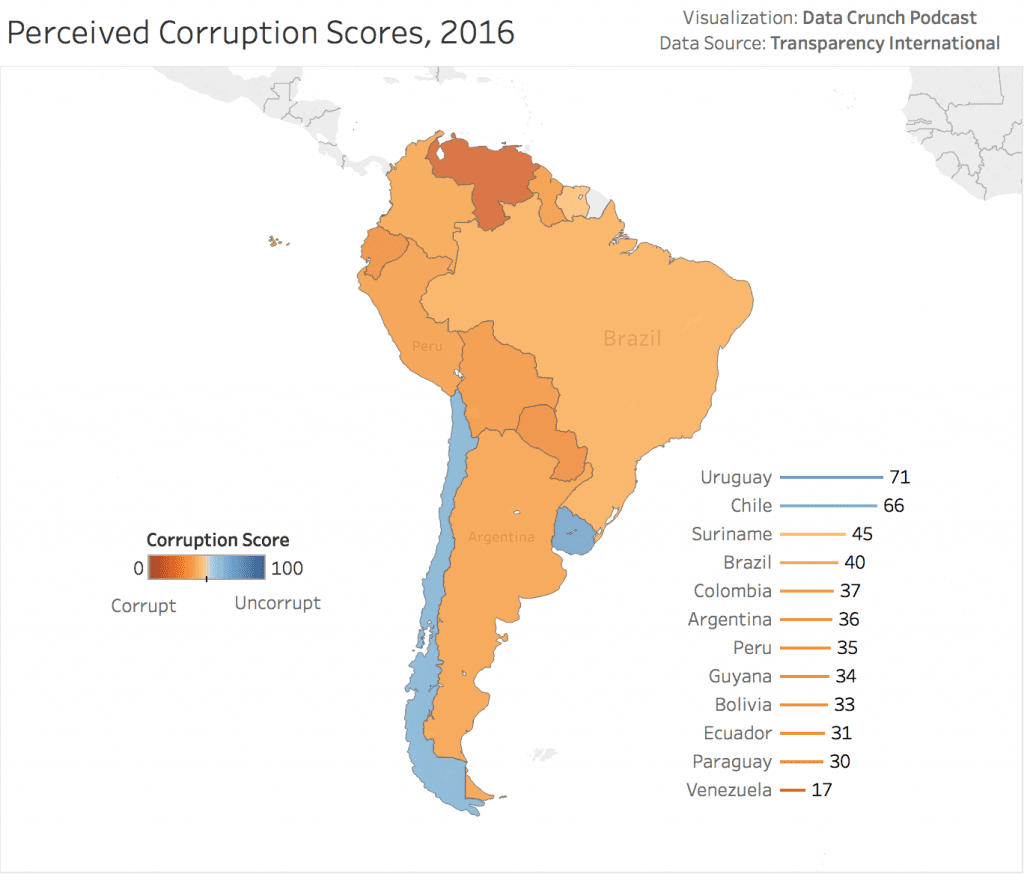 Venezuela is a tragic example of what corruption can do to a country and its people. Numerous sources (here, here, here, here, and here) lay out in detail the awful situation the Venezuelan people are living through as a result of the corruption of the state, which has been identified by USA Today, per the CATO Institute, as being guilty of grand corruption. When criminals are in power, people suffer.

Examples of the corruption that is rampant in Venezuela are billions of dollars funneled from the economy through kickbacks, blackmail, and import schemes. Bribery is rife in government contracts and other business deals. Because of intense food shortages and refusal of outside help, the military has been put in control of food distribution and has turned people’s hunger into a profitable racket. And then there was the narcosobrinos incident, involving the arrest in the United States of two of Maduros’s cousins running a huge narcotics trafficking operation.

While it does not show on the Government Corruption World Map, this all comes with tragic consequences. People are suffering and dying because there is not enough medicine. Caracas has the highest murder rate of any city in the world. Dangerous infectious diseases that we have previously controlled, like malaria and diphtheria, are on the rise, and there are over 700,000 cases of Zika, a huge outbreak problem. People often only eat one or two meals a day because of the intense food shortage and spend several hours a week waiting in lines to procure even that small amount. Toilet paper sells on the black market because it’s so scarce. The power grid rations electricity is with large, rolling blackouts. This is juts one of the lessons the Government World Corruption Map teaches us about politics.

The situation is serious and tragic. This is what high corruption brings to the people. Sadder still, there are numerous countries around the world that face this same level of corruption and worse. In fact there are nine countries with scores worse than Venezuela. Check out the Government Corruption World Map Comparison below. 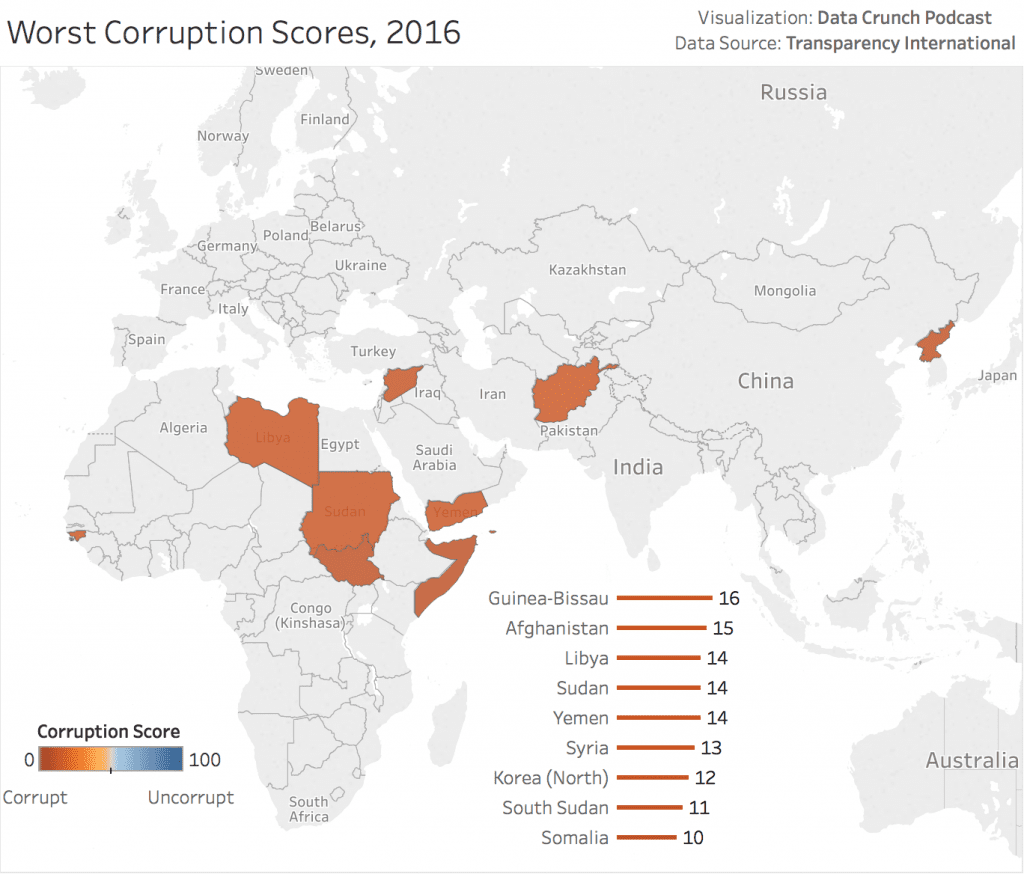 If you live in a country with low corruption, be grateful. Last year only 4 percent of the world’s population live in countries with what we might consider a really good score, over 75. (Ideally, of course, we would want that score to be in the 90s, but if we consider countries only with a score 90 to 100, then we’re down to just .14 percent of the world’s population, basically Denmark and New Zealand). Here is the list for over 75 simplified on the Government Corruption World Map: 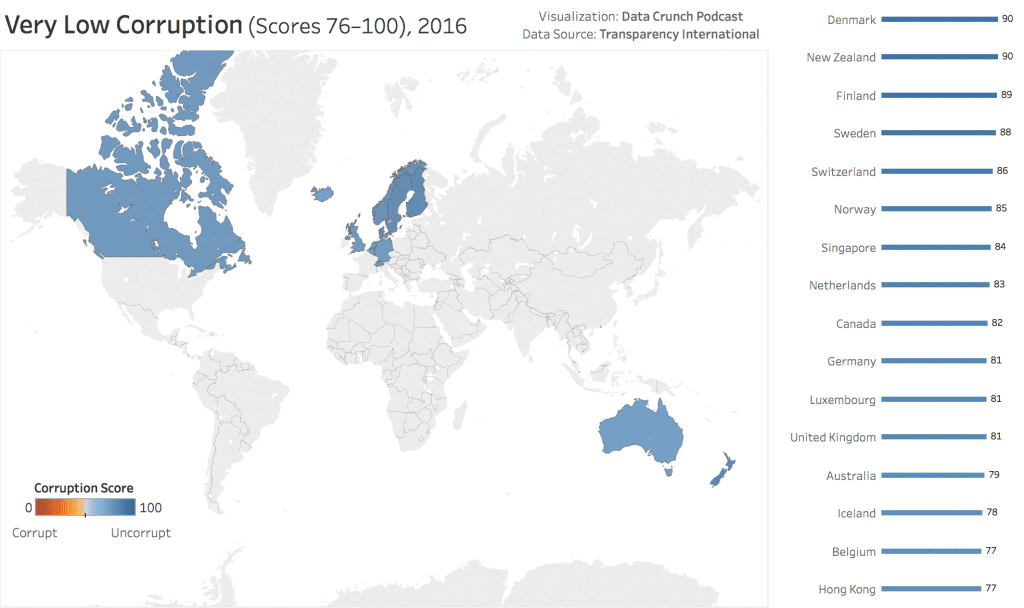 That means 96 percent of everyone on the planet lives in a country with at least a moderately high corruption score. That’s huge. Check the Government Corruption World Map below for  the breakdown in groups for 2016:

For countries with the lowest scores, it results in absolutely awful circumstances, using Venezuela as just one example. The Government Corruption World Map below breaks down all countries under a score of 25 by population looks like this: 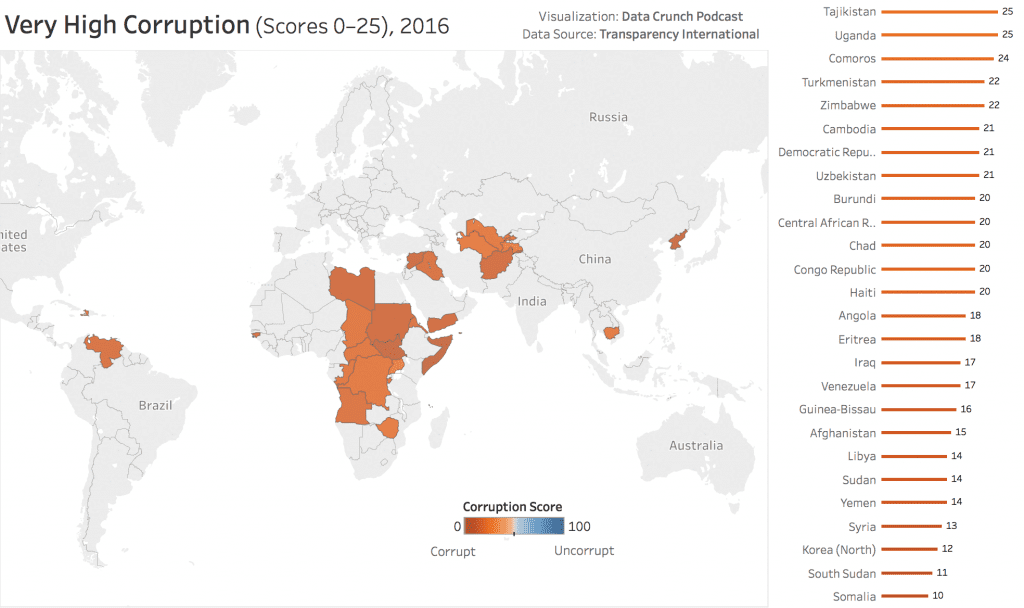 By far, the largest group by population lives in countries from 25–50. Not extremely corrupt, but still more corrupt than clean. Check out the Mid-High scores on the Government Corruption World Map below. 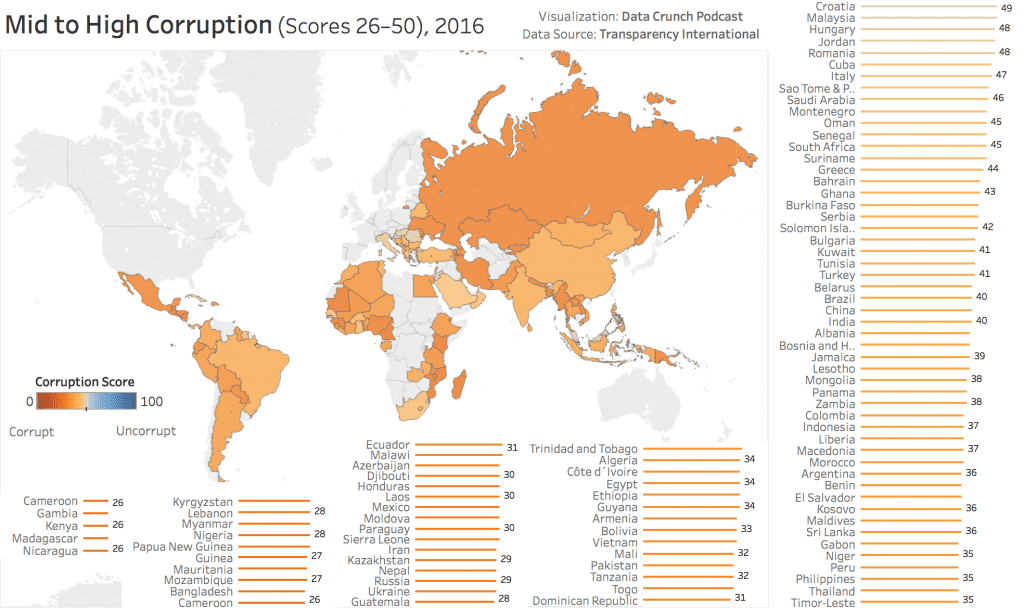 Then we get to the just 15 percent of the population that lives in countries where the scale at least tips toward the clean side. For 50–75. Check the break down on the Government Corruption World Map below. 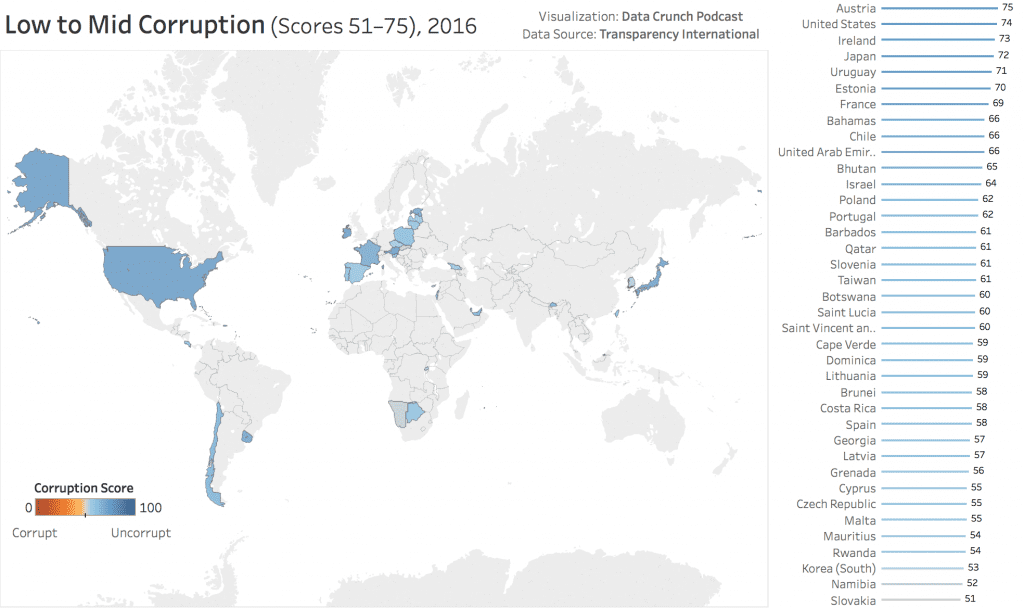 And we’ve already seen what the top 4 percent looks like above. As a conglomeration of this data, here’s an animation of the Government Corruption World Map of it all together:

Of course, we certainly need to shine a spotlight on some examples of countries that are getting better and better scores over time (meaning they’re getting less corrupt based on the Government Corruption World Map): 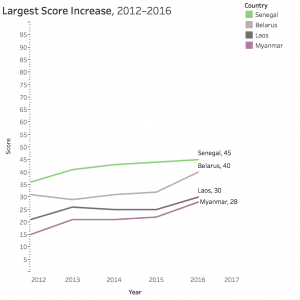 Unfortunately, there are more that are declining at a rapid rate than are improving: 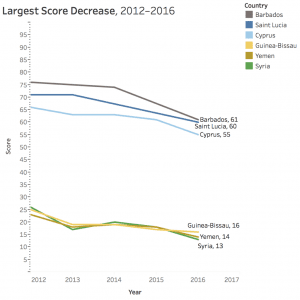 Hopefully this data opens our eyes to a better understanding of the circumstances of the governments and people living under them in the world. There’s obviously a lot of work to be done to reduce corruption, and there’s no clear answers on how to get there, but awareness is always the first step. Check out resources from Transparency International about how to get involved.

Also keep up to date with our work by subscribing to the podcast (iTunes, Google Play, Stitcher, Overcast).

You can also download this particular data set I used for the visualizations here on Data.World, or dig in deeper with our interactive visualization on Tableau Public. Did you like our Government Corruption World Map visualizations? Let us know if you want to see more. Learn more about Tableau Visualization through our in-depth training today!

The Road to a Data-Driven Culture in Your Organization Ultimate Guide to Tableau Clustering | Create, Interpret, Explain